Home » Stereotypes When On Holiday – British vs. German

Home » Stereotypes When On Holiday – British vs. German

Stereotypes When On Holiday – British vs. German 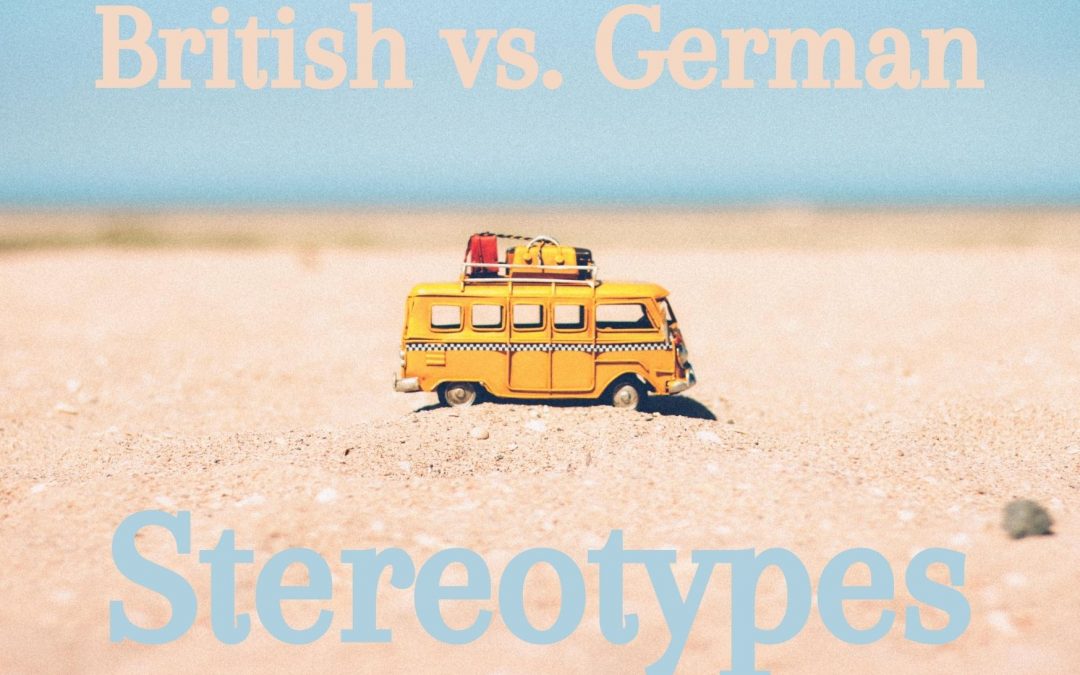 Stereotypes exist in every culture, and everyone has different ideas of how people from different countries behave when on holiday.

It’s finally getting to the time of the year when we can start travelling abroad again. Due to the Coronavirus pandemic, most of Europe’s population is desperate for a holiday, so we thought we’d refresh your memories with a few of the most common stereotypes, from the point of view of a British person living in Germany.

Let’s start off with the British stereotypes. British people are renowned for making the most of their holiday abroad. From experience, I can say with certainty that getting up early, travelling to the airport and working your way through the tedious airport security is one of the most exciting, yet stressful times of the year for British people.

After having cleared the contents of your hand luggage bag with security (most of which contain British teabags and sugar – small cliché to start us off), some British travellers like to start their holiday off with a pint of beer and a nice cooked breakfast at the airport. This is usually because they think that two-week holiday to a country with high levels of tourism from the UK will somehow have scorpions and goat as their local delicacy…

When on the plane, a lot of Brits tend to order the hugely overpriced drinks and snacks from the in-flight service, which is part of kickstarting their holiday. The other half, however, always tend to be snoring after the stressful morning getting through the airport, or looking after screaming children who are unhappy as they aren’t allowed to buy a bag of sweets for the same price as a whole new flight.

When they finally arrive in their holiday destination of choice, you can guarantee that the first thing to come out of their mouths will be to do with comparatively scorching weather…

What are the stereotypes of Brits and Germans abroad?

A man with sunburn carrying a life ring, a woman drinking in a nightclub and an England football shirt.

Why do people refuse to wear sun cream? Even I don’t know, but I admit that it is very normal for British people to complain about their sunburn on the second day of their holiday. At this point, they usually give in and decide to layer on the SPF 50, but only when they realise they may have to stay in the shade to drink their beer rather than in the sun.

Which brings me to my next point…

Many Europeans are convinced that British people are always drunk when abroad. I can confirm, however, that this is not the case. In British culture, alcohol (including beer and wine) is normally saved until the evening (Feierabend) or the weekend. For this reason, British people like to make the most of their holidays and enjoy a beer or two during the day, as this is a pleasant exception (for most people).

Having said that, you could be forgiven for taking up this opinion, as young British students to love to make the most of the cheap booze when on holiday with their friends.

The final stereotype relates to the clothes British people wear when abroad. If you were to ask me the question “What do British people generally wear abroad?”, I would know the answer you were looking for: Football shirts. Lots of Brits abroad do wear football shirts on holiday. Although I don’t personally see the attraction, football shirts can be comfortable and practical, particularly if you are swimming and slightly wet after. In any case, as far as I’m aware, they don’t wear them just to show off the fact that they are British.

A sunbed with a towel on the beach, a man with socks and sandals on and someone planning with a calendar.

Now onto the Germans. Before I came to Germany, there were many German stereotypes I thought were just that – stereotypes. When I first wrote this article, I asked my German colleagues what their opinions were. They said the exact same stereotypes existed in Germany, so I feel it’s okay to write about!

Germans always wake up extra early to go and lie their towels on the sunbeds, which means they automatically have them for the day.

This cliché exists in most cultures around the world. If you see someone reserving a sunbed in a hotel or holiday complex, most people would assume they are German.

It could be the case, however, that lots of people are just using the ability to moan as a way to distract their jealousy. Let’s be honest, most of us would find it difficult to muster up this sort motivation or organisation when on holiday. For this reason, I don’t find this German stereotype completely impolite, as anyone could do it if they could be bothered!

However, studies into this have actually been conducted, and it turns out that Brits are more likely to reserve a sunbed, whereas more Germans claim that finding a good spot on the beach is a vital part of enjoying their holiday.

Germans are happy to walk round every country in socks and sandals (thought of by many as a ghastly combination).

Although a very practical combination, I think we can all agree that the socks and sandals look is a pretty outdated look and is definitely on the list of German stereotypes.

It is usually too warm for socks on holiday, let alone ones which rise up to knee height. Together with a pair of brown leather sandals and some short tight shorts, everyone knows where to spot a German on holiday.

A German’s holiday is carefully planned out in advance and they stick to a tight schedule the whole time.

When I asked my colleagues what their idea of a German abroad was, they said “vor einem Jahr geplant” – planned a year in advance. This was an answer I wasn’t aware of, but maybe the German holidaymakers like to plan in advance to get their finest sandals at the ready, who knows?

I was then told that a German schedule is carefully planned for each day of the holiday. They like to eat at the same time every day (to the exact minute) and sometimes have a siesta-type nap in the middle of the afternoon each day. In my opinion, the nap isn’t such a bad thing, as it would get you ready and fired up for a nice meal and a few drinks during the evening – but that would definitely not be planned out for every night!

Are these stereotypes positive or negative?

To conclude, I would say that everyone is doing the right thing by enjoying their holiday in the way they want to! Whether that be a dreadful combination of outdated clothes, a beer with breakfast or an early-morning sunbed reservation, everyone is sure to have a good time!

If you’re planning a holiday to Germany or would like to learn more about these cultural differences and stereotypes, check out our Berlin German courses! If you are on holidays in Mallorca and need urgent help in understanding German, then you can also attend an online german conversation course.