Experience the Festival of Lights 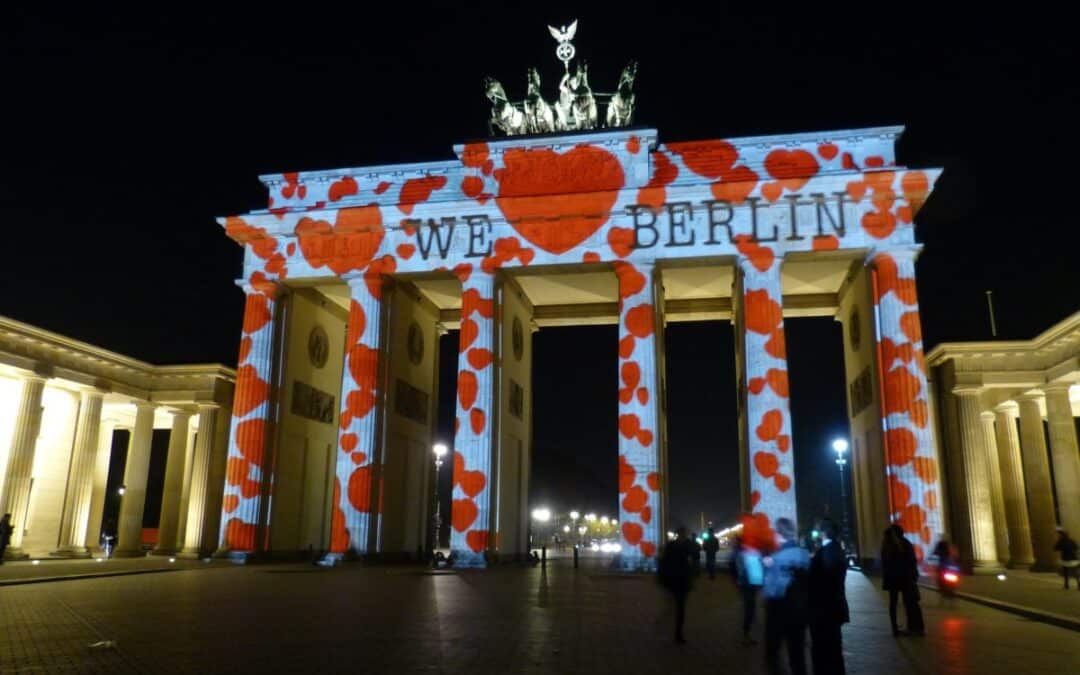 If you’re wondering when to take a night tour of Berlin, this is your moment. Once a year in October, Berlin turns into an open-air light art gallery. Where? At the Festival of Lights. Adding in this way some brightness to the beginning of the dark season.

This event will run from the 11th to 20th October. And it covers around 100 different locations which are illuminated daily from 7pm until midnight.

Local as well as international artists use this unique opportunity to show their temporary light art works by transforming the city into a huge stage. The Berlin Festival of Lights connects diverse cultures and people throughout the world. Because the lights speak all languages.

We are celebrating this year the 15th anniversary of the festival. 15 years of Festival of Lights in Berlin!!

This year’s theme for the festival is guided by the 30th anniversary of the fall of the Berlin Wall. In this way, light projections will tell touching and emotional stories.

Do you want to see your photo on the iconic TV Tower? ‘Faces of Freedom’ will project people’s photos on the TV Tower in a huge format during 10 seconds. During the festival, all the photos will be brought together creating a big collage. It is easy to be part of this initiative: send your photo or your 10-second video and then you will appear on the TV Tower!

There are some special events happening during the Festival of Lights. Including art and music events, photography workshops, open house at selected buildings, and charity events.

DAS Akademie takes you to the Festival of Lights!

If you want to experience the festival in a diverse and multi-cultural environment, we invite you to come to our on-foot tour! Just ask for more information at our school in Berlin!

Sian Dunn
09:49 19 Jan 21
I was with DAS Akademie prior to online learning and was very impressed with their transition to online learning. The... classes flow nicely, class size is not too big and lessons are professionally run. The Team at DAS are always communicative and ready to help all students. In my experience, the teachers are well organised and interactive in their approach to teaching.read more

Irene Adler
09:52 17 Jan 21
I highly recommend DAS Akademie Language School in Berlin and especially "one to one German Course" that I had a... pleasure to undertake there for more than one year. Friendly and professional staff as well as excellent and skilled teachers with the exceptional commitment to their students. I greatly improved my German language skills with them and I am looking forward to following a new course soon :)!read more

Sonia Nucera
17:55 15 Jan 21
I did an intensive course for 9 months at DAS Akademie, I started from an A1 level and I have now a C1 level. My German... was fluent at the end of the course (please note that no school does miracles, you have to put efforts and study if you want to get fluent), I have found my current job after joining this course and I will take some additional lessons in order to further improve as soon as I’ll have a bit of time. During those 9 months I have also met for the first time some of my closest friends here In Berlin. Personnel from the school have even helped me to find an accommodation when I first moved to Berlin! Everything super positive!read more

Anna Shklyarova
12:38 14 Jan 21
Had a chance to take intensive course starting autumn'20 and can honestly recommend this school. Everyday classes... became my routine and I'm lucky to have new friends from here. The best part of education was creating everyday live situations that we need in our routine like calling a doctor, make termin and be prepared for any small talks in German. Thank you for this time!read more

Vlad H
11:34 14 Jan 21
Went from B2 to C2 here and can definitely recommend this school! The teachers are truly excellent and make learning... the language easy and fun. The staff is professional, friendly and flexible with adapting to learners' needs. Also, found the value for money really good, the best i have had in Berlin so far. All in all, very happy with the experience!read more
See All Reviews
This website uses cookies to improve your experience. We'll assume you're ok with this, but you can opt-out if you wish. Cookie settingsACCEPT
Privacy & Cookies Policy